Twin Peaks: Fire walk with me 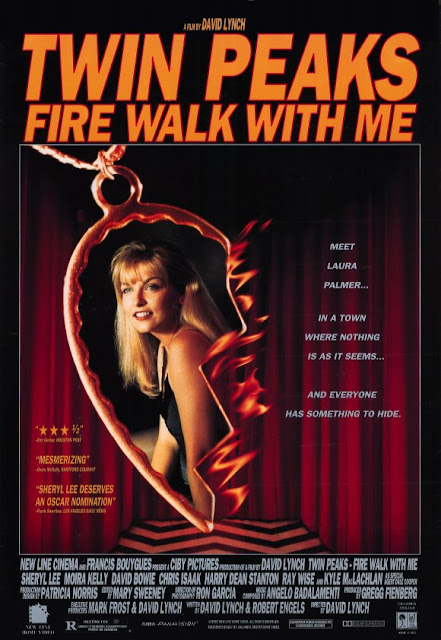 
First of all, we have to consider we are talking about the prequel of one of the most famous TV series all around the world: Twin Peaks. The unfinished adventures of the special agent Dale Cooper (Kyle MacLachlan) have a special place on the TV series lover’s hearts. Twin Peaks had a poor treatment by ABC Network, who forced David Lynch (Blue velvet, Dune) to reveal the most appreciated secret of the plot too early. This mistake favoured the hurry end of the serial to avoid their cancelled. However, many people needed more of their weekly oniric strawberry cake’s portion.
David Lynch felled the same thing, and he thought that the serial didn’t have the best end. Twin Peak’s universe is more than the answer of “who killed Laura Palmer?” He tried to confirm it with this sequel, whose firm intention was proved that the serial must had more episodes. “If Twin Peaks: Fire walk with me works well, the serial would have an opportunity to make a comeback”, David Lynch said.
The movie talks about the murder of Teresa Banks and shows the last week of Laura Palmer’s life.
The true is the movie don’t comply this achieve. Lynch makes the same errors of the final episode of his serial. He develops a great plot and ideas, but at the end, the viewer needs more answers to complete the story. The director tries to end the movie story and let some questions in the air. But in fact, he builds an ending without enough argues.
Regardless of the unit lack, Twin Peaks: Fire walk with me has glorious moments. The sequence of Ray Wise (Bob Roberts, The Chase) and Sheryl Lee (Wild at heart, Vampires) in the car is brilliant. Chris Isaak (The silence of the lambs, Little Budha) and Kiefer Sutherland (Young guns, Promised Land) cover successfully the Cooper’s role (McLachlan don’t have a main role in the movie). David Bowie has a great performance and his character is relevant to know Cooper’s future in the serial. The plot grips you but the end needs more consistency.
Anyway, there is no doubt that we are talking about a David Lynch product. He keeps with his essence. He shows curious characters in strange worlds with strange rules without limits between reality and parallel worlds.

One of the best TV series ever... But i couldnt finish it. Maybe this year I will do